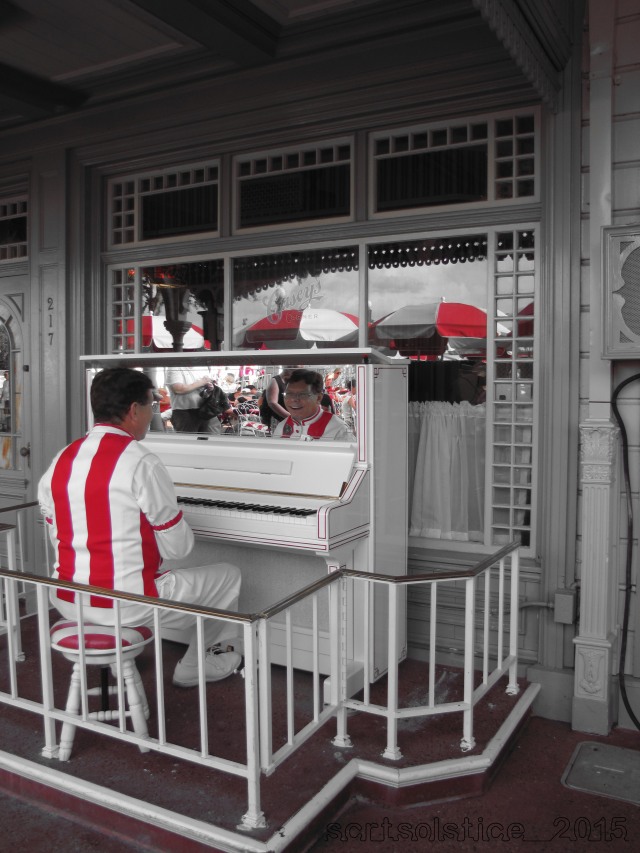 Cast Members work so hard, especially in the parks, and the amount of happiness and dedication they have for their position is amazing. This particular CM – Jim was just phenomenal. I wish I knew more about him, but he was in the Magic Kingdom outside of Casey’s Corner just signing and playing piano. One of my highlights was just seeing how consistent and enthusiastic he was for his craft.

It didn’t matter if there were a ton of people listening or no one in the area, he was just happy to be there and to be playing. I could go on and on about Jim’s dedication, but I’m sure you get it from these few sentences – and if not, just go.. now (!). We had two instances with Jim.

The first time Mr. A Squared and I were sitting in Casey’s corner, just eating and he started getting people excited, hyped up for the day and then instantly transitioned into congratulating us on our wedding because he saw the ears and the buttons. Everyone in the area at the time started cheering along. The second time, we were rushing through  the sitting area of Casey’s Corner for a shortcut around the crowd – didn’t stop him. He started chanting about Newlyweds and playing the wedding march – it was brilliant. We were in a rush and couldn’t say much, but I was thankful that he spotted us and started to play despite the fact that we were running. Cast Members who go out of their way to make someone’s day no matter the case (and occasionally without acknowledgement at all) are the ones who stand out for me. #castmembersrock always 🙂

I know that he could also be used for Magical Moment (25), but I wanted to highlight how Cast Members rock on a daily basis and not just in a moment. Jim does that.

And pardon the weird filtering… I had set the camera in hopes to just pick up the red and white of Casey’s Corner… but apparently it picked up all red tinged things. Showcases how jolly he is at least 😉