It has been a weird two years since I updated this site, gave it a face lift, and locked into the hope that I would be in a somewhat better and more creative position. Of course, things don’t always work out like you think or hope they would.

Life has a habit of keeping you on your toes. Keeping you at the gate of everything you want and dangling the hope and positivity in front of you. It’s there. It’s in arms reach, but alas you’re too short or your arms just aren’t long enough.

When I launched ScrtSolstice and the Power of Mess I was half the person that I am now. Someone somewhere will read this and shake their head, claim that can’t be the case, but it is. I started the online entity that is this because I needed a way to express myself and build self-esteem. It was the kick off of the social media era where people were just starting to realize that they could find their niche of people outside of the comfort of their hometowns. Turns out that you’re not as alone as you thought, but it comes at the price of constantly vying for the outside world’s attention, their appreciation, their likes and views.

At some point over the last few years that came to a head for me. I was creating content for what felt like an endless void. I would spend all of my time taking pictures, editing videos, sitting online and hoping that things would fall into place – to make all of my effort worth while. It stopped being fun. I wasn’t making content for me anymore, for the girl that wanted to find herself. Eventually Youtube changed their rules, so not only was I not getting comments anymore but now I couldn’t make money either – so I jumped.

Twitch became my haven, I expanded into live streaming and I started to create content for other reasons. So I jumped into Social Media again, but on my own terms. Streaming became a regular thing and I built followers faster than I had on Youtube. I got a job that had a somewhat public presence and I boosted myself even more. And then I crashed again. I lost what I wanted to accomplish with all of this.

Truth is…I don’t know who I am anymore. I am not the girl that started ScrtSolstice. I am not the woman who continued it. I am not the human who needed it to build them-self, or the one who wanted to do something amazing with their platform. All I know for certain is that I am Amy – or some variation of.

I don’t know where I am going, or what I hope to accomplish by writing this. There is no guarantee of a follow-up post, a chronicle of a journey, or even a published book, but I am putting it out there anyway. I’ve gone from a child making Youtube videos, to a teenage blogger, to a young adult cosplayer, to an adult streamer – and for now I am just going to be a middle-age human that exists and I think that’s enough for me. For now.

We’ll see where that leaves us. Maybe there will be more here, maybe less. But I’m still alive and that’s something to be grateful for.

“Whenever we proceed from the known into the unknown we may hope to understand, but we may have to learn at the same time a new meaning of the word ‘understanding.”
― Werner Karl Heisenberg, Physics and Philosophy: The Revolution in Modern Science

“I think the reward for conformity is that everyone likes you except yourself.”
― Rita Mae Brown

“A single night is stuffed with minutes, but they leak out, one by one.”
― David Mitchell, number9dream

Lots going on at the moment, so just a quick update from me for the time being.

First off: new layout! You may have noticed this already, but the website has been updated to a new layout that will hopefully help organize everything and shift the focus onto the writing specific areas of the content. The reasoning behind this switch is actually a perfect segue into our second update – the novel.

I have been working on updates and edits to Teagloom: volume one for the last year and it is going quite well aside from the writers block with the climax. Yes, I know that some do not believe in this little hiccup and believe it is an excuse. You do you – but I have a blocker going on with this one section so I’ve been working on the Kickstarter and getting everything organized for the book to be published. Progress abound! We have a layout for the campaign, media posts, an artist for the campaign, and started the processes required to create a publishing imprint. Teagloom: volume one’s Kickstarter campaign is set to start this October with publishing and back rewards hopefully heading out in 2019. Keep some eyes on your social media because #Teagloom is coming.

We’ve also been keeping up with Monochrome Monday – a project I started to try to keep my mind creative despite the writer’s block. There have been some interesting creations so far and there are an abundance to come. I’ve been using an old decommissioned library book that one of my university professors gave me to destroy and I think it’s perfect for this sort of thing: American Social Patterns. It’s no wonder that the library chose to remove it, some of the concepts in this book are so outdated compared to today; of course, it is from 1956. Adds a new layer to look at when reading through those posts.

“See now the power of truth; the same experiment which at first glance seemed to show one thing, when more carefully examined, assures us of the contrary.”
― Galileo Galilei, Discorsi E Dimostrazioni Matematiche: Intorno a Due Nuoue Scienze, Attenenti Alla Mecanica & I Movimenti Locali 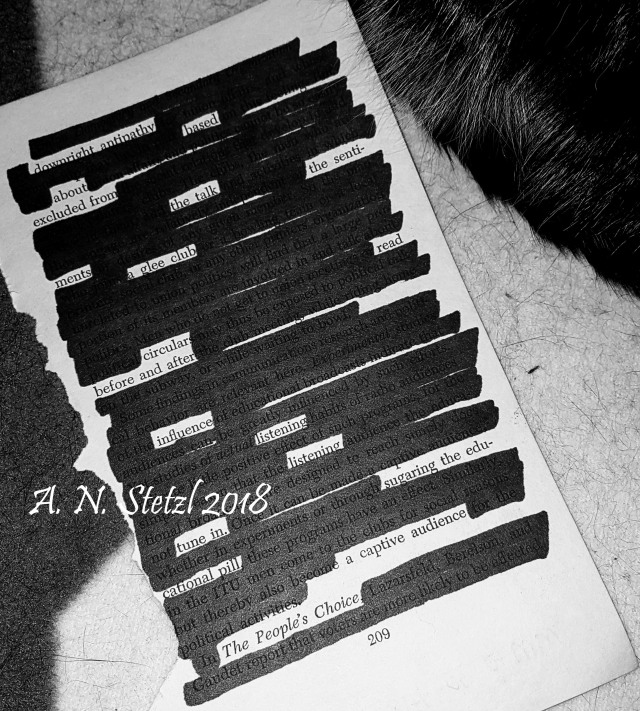 “Green in nature is one thing, green in literature another. Nature and letters seem to have a natural antipathy; bring them together and they tear each other to pieces.”
― Virginia Woolf, Orlando